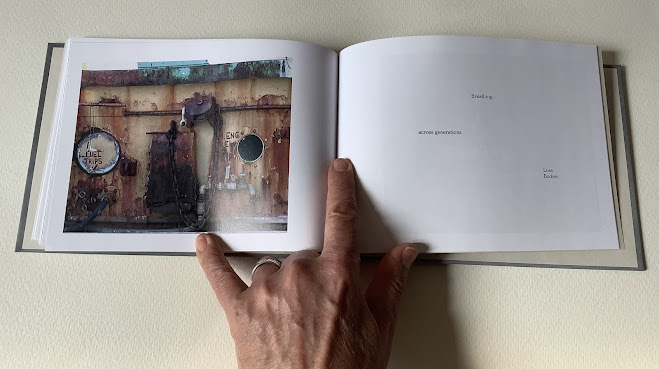 Jane Calow is an artist and writer who has exhibited widely.  Her latest interdisciplinary project, Mantle will premiere on Thursday 13 October, 2022 at Factory Studios, Bristol (see booking below).The artwork is a requiem for irrecoverable bodies lost at sea. The word ‘Mantle’ can mean a number of things; a responsibility that passes across generations / a cloak / the region of the earth’s interior between crust and core. The piece was triggered by a visit to Coverack, Cornwall where the Mantle breaks through the earth’s surface. The live performance of Mantle consists of projected film work with newly composed, original live cello music, recorded ambient sound work with electric guitar, a printed ‘silent libretto’ held by each audience member and the artist’s book (available to buy at the event). Jane has worked on Mantle with a number of contributors from a range of disciplines; Daniel Hinchcliffe (Curator), Clive Radford (Composer), Juliet McCarthy (Cellist), Nic Howes (Geographer), and Adam Pinfold (Audio-Visual Engineer).
You are warmly invited to the premiere of Mantle by Jane Calow

This is a free event but booking is essential.
To reserve a place visit: MantlePremiere.Eventbrite.com
Presented nationally and internationally, Jane's artwork Traject explored the idea of a ‘moveable site’, highlighting themes of physical and psychic spatialisation informed by the psychoanalytical structure of trauma. Her artist’s book produced as part of Traject is held in Tate Britain library archive. Jane directed the international interdisciplinary conference Public Representation and Private Mourning: Commemoration and Memorial (UWE, 2002). Her artwork Mantle developed from Traject, worked with mourning and grief.  She published as Guest Editor on the 12th edition of the Routledge journal Mortality, entitled Memoria, Memory, and Commemoration and has lectured at the University of Bath on the MSc in Death and Society. She co-directed the international symposium Present: trauma/art/representation at ICIA (2006). Jane has also worked as a curatorial consultant to ICIA on the 2009 programme theme entitled Arts, Spatialisation and Memory for which she co-directed an international symposium. She was Head of Fine Art as Social Practice at the University of Wolverhampton. She was also Research Fellow at the Centre for Contextual, Public and Commemorative Art at the University of the West of England. Jane co-edited the book, Speculative Strategies in Interdisciplinay Arts Practice (Underwing 2014) with Daniel Hinchcliffe and Laura Mansfield. Jane's Chapter is entitled Shoreline and Sea. Her text is a reflection on her artistic practice (specifically the construction of Mantle) that embraces interdisciplinary research, discourse, collaboration, negotiation and physical making. She draws upon Geology, Geography, Psychoanalysis, Language and Epistemology. There was a seminar launching the book in November 2014 at Birmingham School of Art (BCU). For more information about the book and the launch click here.